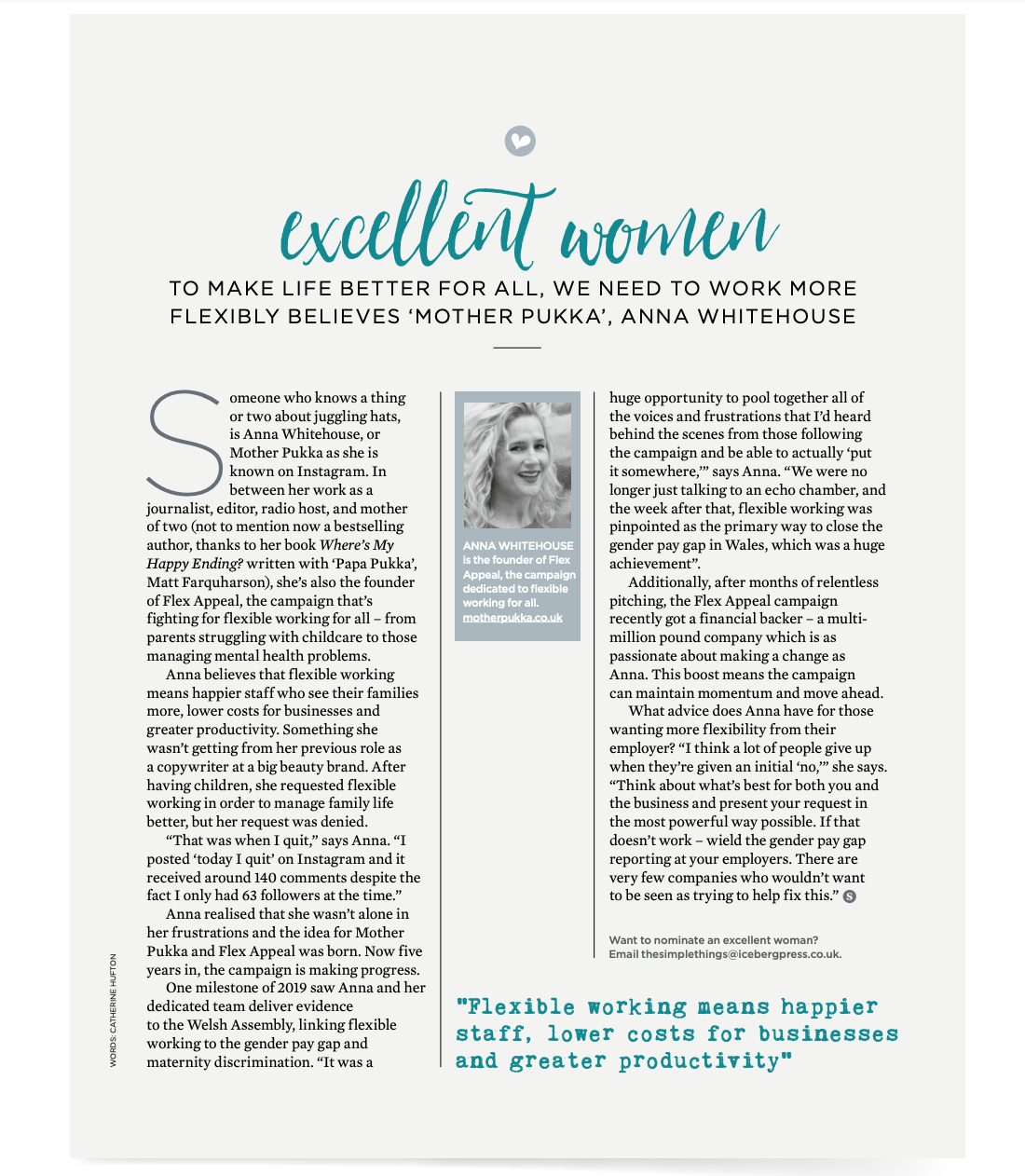 Someone who knows a thing or two about juggling hats, is Anna Whitehouse, or Mother Pukka as she is known on Instagram. In between her work as a journalist, editor, radio host, and mother of two (not to mention now a bestselling author, thanks to her book Where’s My Happy Ending? written with ‘Papa Pukka’, Matt Farquharson), she’s also the founder of Flex Appeal, the campaign that’s fighting for flexible working for all – from parents struggling with childcare to those managing mental health problems.

Anna believes that flexible working means happier staff who see their families more, lower costs for businesses and greater productivity. Something she wasn’t getting from her previous role as a copywriter at a big beauty brand. After having children, she requested flexible working in order to manage family life better, but her request was denied. “

That was when I quit,” says Anna. “I posted ‘today I quit’ on Instagram and it received around 140 comments despite the fact I only had 63 followers at the time.” Anna realised that she wasn’t alone in her frustrations and the idea for Mother Pukka and Flex Appeal was born. Now five years in, the campaign is making progress. One milestone of 2019 saw Anna and her dedicated team deliver evidence to the Welsh Assembly, linking flexible working to the gender pay gap and maternity discrimination. “It was a huge opportunity to pool together all of the voices and frustrations that I’d heard behind the scenes from those following the campaign and be able to actually ‘put it somewhere,’” says Anna.

“We were no longer just talking to an echo chamber, and the week after that, flexible working was pinpointed as the primary way to close the gender pay gap in Wales, which was a huge achievement”. Additionally, after months of relentless pitching, the Flex Appeal campaign recently got a financial backer – a multimillion pound company which is as passionate about making a change as Anna. This boost means the campaign can maintain momentum and move ahead.

What advice does Anna have for those wanting more flexibility from their employer? “I think a lot of people give up when they’re given an initial ‘no,’” she says. “Think about what’s best for both you and the business and present your request in the most powerful way possible. If that doesn’t work – wield the gender pay gap reporting at your employers. There are very few companies who wouldn’t want to be seen as trying to help fix this.”

Leave here you e-mail address and get the latest offers